The Ghost of Sparta 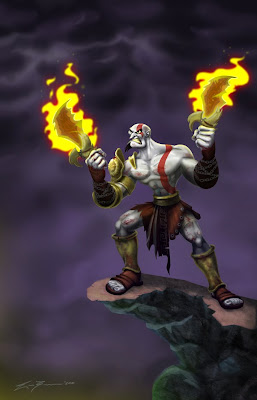 Here's an illustration I felt compelled to do after playing through the God of war Collection for the PS3. Not only were the games a great deal of fun but the story, artwork and effort that went into these games is incredible. I found myself fascinated by the Greek mythological world they presented. As absurd as it was at times it fit the bizarre stories I remembered reading in grade school about the Gods of ancient greece. These dieties of old were nasty spiteful beings with the same desires as men despite their great powers. I find it really intriguing that ancient mythology like this still holds up so well today. I can rant and rave for a while about the GoW series but I'll leave it at this.

As for the illustration I'm actually painting it in photoshop and aiming for a nice rendered look. Here's an updated painted version...still need to fix a few things...almost done!

I'd personally play through the series again if and when the time to do so comes around.
Posted by Unknown at 5:45 PM 7 comments: