Undone by the Blood 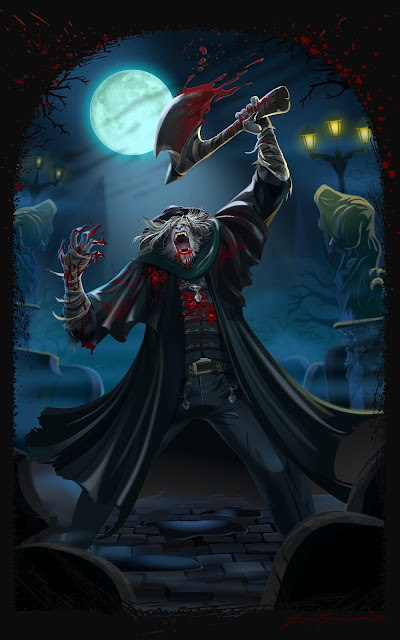 This past March I was pleasantly surprised when I started playing Bloodborne.  However I didn't immediately appreciate the game.  In the first couple night I nearly had me put it down for good, like many people out there I found it's punishing gameplay discouraging.  As I kept on playing I began to see how amazing and clever the soul series format really is.  The need for checkpoints and instant saves in the game became less relevant.  Most AAA titles I have played this year (and in the past) now seem very unrewarding in comparison, or feel very clumsy in their combat.  The gambling of souls/echoes in Bloodborne really makes each venture into the world mean something and forces you to be careful and learn your surroundings and the enemies within them.

This game has easily become one of my all time favourites for many reasons, which I'd love to elaborate more on but I'm no writer, and would rather show my love for the game in an illustration. But to sum it up briefly it's entire setting, atmosphere, the challenging combat and of course the amazing lore make this a unparalleled experience.  If you haven't played it and like a good scare and love a good challenge...pick it up!

I really wanted to illustrate something to sum up the game, but I had too many memorable moments to pile into one image.  Most of the boss fights really stood out for me, and I think Gascoigne's fight may have been the most distinct with it's difficulty curve being a cliff, and the lovely surprise of his "undoing" transformation two thirds into it which left my hands trembling afterward.  I can't wait for more Bloodborne and hope it receives a well earned sequel/prequel.

This illustration was created in Flash CC.